by Editor
in Economy, News 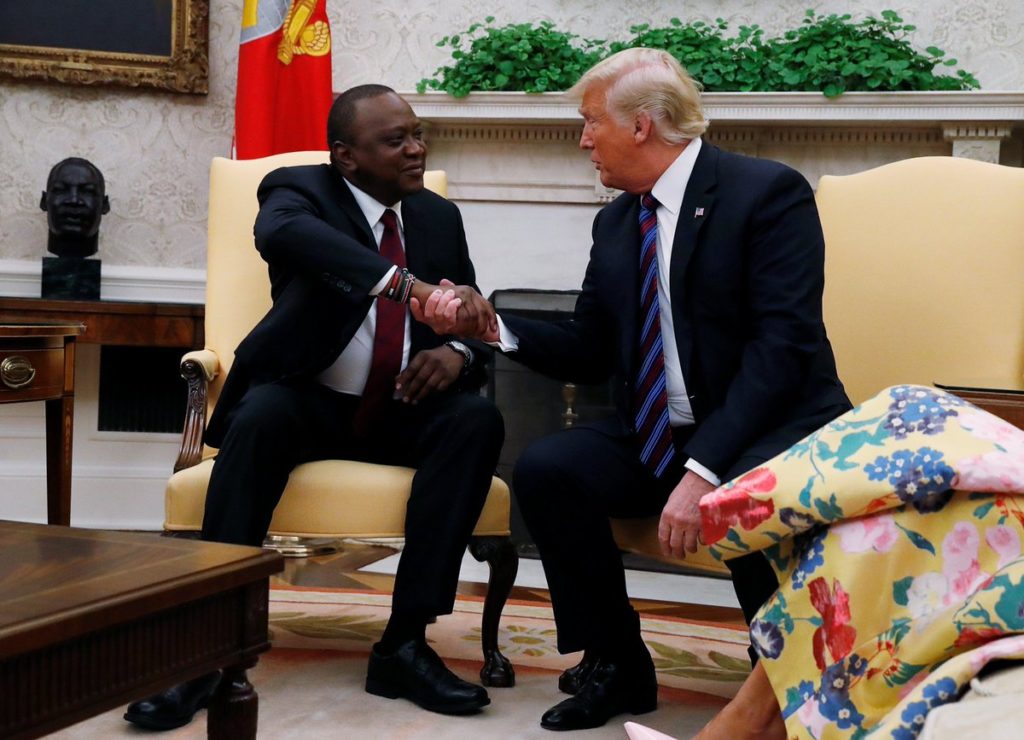 The U.S. plans to invest more than $1 billion in projects across Africa in the next three years to support economic developments on the continent.

President Uhuru Kenyatta of Kenya on Monday met with the United States President Donald J. Trump for a bilatral meeting at the White House.

Accompanied by their First Ladies, Margaret Kenyatta and Melania Trump, along with Vice President Mike Pence, Secretary of State Mike Pompeo and other Cabinet officials, the two leaders mulled ways to increase trade and investments between their two countries, as well as schemes to strengthen and deepen their longstanding strategic partnership.

President Kenyatta is the second African leader from the sub Saharan Africa region that held a one-on-one meeting with President Trump at the White House.

The other African leader from the region that met with President Trump at the White House is President Buhari of Nigeria, who visited in late April.

Kenya is one of U.S.’ major partners in Africa, both in terms of trade and security on the continent, and a cornerstone of peace and stability in the East African region in fighting terrorism.

President Kenyatta’s meeting with President Trump is a “game changer” for Kenya and significant as both countries continue to work on deepening the economic relations between the them, Kenyan Ambassador to the U.S. Robinson Njeru Githue said during an interview.

“We’re very excited about what is happening between the two countries and glad that President Kenyatta accepted the invitation from President Trump because it’s going to deepen the economic relations between Kenya and the U.S,”  Ambassador Githue said.

The U.S. is currently Kenya’s largest source of tourism, having overtaken the United Kingdom, with more than hundred thousands of Americans visiting the country last year.

That number can easily be doubled, the Ambassador said when more direct flights are added to routes between the two countries.

President Kenyatta also underscored the significance of his meeting with President Trump. Speaking to reporters after his arrival the White House Oval Office, Kenyatta said he aims to use his visit to renew the trade partnership between his country and the U.S. as well as strengthen their fights against the terrorist group, al-Shabaab, in East African.

“We’re here to pursue and strengthen our trade and investments ties, which are already very strong,” said Kenyatta. “We have a good number of American companies in Kenya. And we want to see how we can strengthen that going forward for the mutual benefit of our two countries. I believe that we will have a very fruitful discussion this afternoon.”

Ostensibly still in a good mood from this morning’s announcement of a new trade deal with Mexico. President Trump said Kenyatta picked a good day to visit the White House.

“We’re going to be making some great deals for both countries,” said President Trump about their bilateral meeting.

The American President also revealed that representatives from both countries are working on finalizing and signing major deals, including a major infrastructure “roadway project that will be record setting, in many ways,” said President Trump.

During the meeting with Secretary Ross and top American business executives, two major deals, worth $238 million, were signed.

The deals are part of the U.S.’ latest efforts to bolster investments in Africa.

Last month, the Overseas Private Investment Corporation, the U.S. government’s development finance agency, announced plans to invest more than $1 billion in projects across Africa in the next three years to support economic developments.

The OPIC’s investments, which will be distributed through a new initiative, Connect Africa, will support transportation, logistics and communication projects across the sub Sahara Africa region, which currently comprises more than one-quarter of the agency’s $23 billion active portfolio.

Although it was scheduled earlier this month, President Kenyatta’s visit to the White House comes on the heels of President Trump’s recent divisive remark about South Africa.

Lexi Novitske, a principal investment officer at Singularity Investments, a venture capital firm based in Nigeria, said President Kenyatta’s visit to the White House gives the African leader an opportunity to speak on behalf of the African continent, as one of the major economies, by addressing some of the concerns that investors, both within the U.S. and Africa, and many in the African diaspora have about the negative impacts of President Trump’s often targeted remarks about Africa.

“I think [this visit] is an opportunity for President Kenyatta to comment on President Trump’s often divisive remarks about Africa and the African diaspora. As a leader of one of Africa’s major economies and speaking on behalf of Africa, addressing the need for mutual respect would make a strong statement,” Ms. Novitske said.

Political and business experts underscored that while the Trump administration continues to explore ways to bolster trade and investment relationships with African nations, it also needs to make prudent and diligent efforts in curbing negative remarks, such as the ones President Trump have made about Africa and the African diaspora, otherwise it could undo a lot of the progress the U.S. has made on the continent as well as lead to potential fallout that will give its biggest competitor in Africa, China, a huge advantage.

Despite any negative remarks from President Trump about the continent, senior officials of the Trump administration said Africa remains a major focus of the President and the administration as they continue to look for ways to modernize its approach to development finance in the region to help grow aspiring partners, promote economic relationships, and increase investment.