The significance of President Buhari’s visit to the white House is not lost on political observers as well as businesses and investors. Many, who were once worried there might be adversed impact on trade relations with Nigeria and other African nations in the aftermaths of Trump’s comments, are now glad that the American president and his administration are making great efforts to improve relations with African nations.

WASHINGTON – U.S. President Donald Trump and Nigerian President Muhammadu Buhari praised each other and emphasized the close ties between their two countries during a joint press conference commemorating President Buhari’s visit to the White House on Monday.

President Buhari, the first president from a Sub-Saharan African country invited by President Trump to visit the White House, received a warm welcome from Mr. Trump and his administration.

The two presidents, along with their respective cabinet team – including U.S. Secretary of Commerce Wilbur Ross, and U.S. National Security Adviser John Bolton, held a bilateral meeting in the Oval Office where they talked about mutual issues related to security, trade governance, human rights and humanitarian crisis before the two leaders appeared before the media.

The American president and his Nigerian counterpart appeared cordial and respectful of each other as they stood side by side at the podium at the White House Rose Garden, with Mr. Trump smiling warmly and nodding engagingly during their remarks.

President Trump spoke first and thanked the Nigerian president for visiting the White House. He lauded Nigeria’s leadership roles as a democratic leader on the African continent and in the fight against global terrorism.

Earlier in his remarks, Trump also underscored United States’ commitments to the continent to create trade partnerships with all African nations to help “create jobs and wealth in all of our countries.”

“Nigeria is the largest democracy in Africa, as I conveyed to President Buhari in our discussions,” said President Trump. “The U.S. deeply values and appreciates Nigeria’s role as a strong democratic leader in the region. The U.S. is currently working to expand troops, create commercial ties with African nations, including Nigeria to create jobs and wealth in all of our countries. We hope to be the economic partner of choice for nations across the continent.”

President Trump, who has made trade and economic relations core components of his administration’s bilateral relations with other countries, also emphasized trade relations as an important part of the U.S.- Nigeria relations. 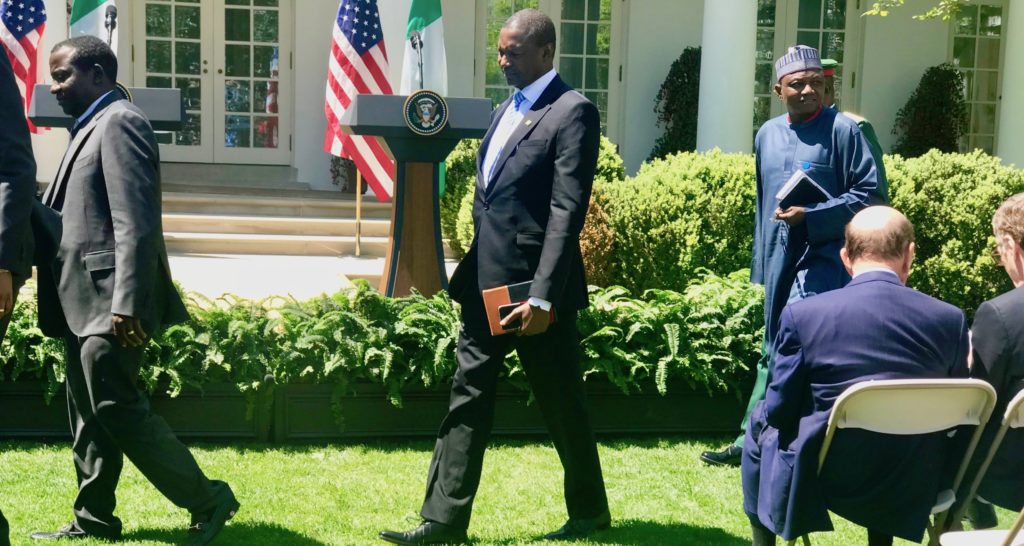 Nigerian miniters and senior advisors arrived at the Rose Garden after a bilateral meeting in the Oval Office with U.S. President Trump and President Buhari of Nigeria. Sitting with his back to the camera is U.S. Secretary of Commerce Wilbur Ross. (Photo by Kemi Osukoya)

Mr. Trump noted Nigeria as one of the U.S.’ largest trading partners on the African continent and said the American government and businesses look to increase its “trade relations with Nigeria based on the principle of fairness, and reciprocity,” which he believes will create an equal trade relations between the two countries.

He urged President Buhari and Nigeria to remove the “substantial trade barriers” that for many years have undercut commercial trade relations between the two countries, as well as improve the business climate in Nigeria to encourage further investments from American investors and companies into Nigeria.

“We have already started talking with [President Buhari] about taking down the trade barriers, very substantial trade barriers to the U.S. trading with Nigeria,” said Mr. Trump. “We think that we are owed that, and President Buhari is also taking steps to fight corruption and improve the Nigerian business climate, and most of all [important] to me and again, ripping down those trade barriers. These measures will make it easier for Nigeria and the US companies to invest and we will be investing substantially in Nigeria if they can create that level of playing field.”

The American president’s remarks, which in its entirety was remarkably cognizant of the significance of not just the U.S-Nigeria relations, but also of all African nations’ trade, political and cultural ties with the U.S., was a huge contrast to the alleged disparaging comments he made earlier this year about African countries, which he, however, had denied.

Nevertheless, that remarks created an expeditious fallout that left many in the diplomatic and business circles on both continents, as well as African civilians, worrying about the negative aftermath potentially undoing many years of strategic, political, economic, trade and security diplomacies and relations between the U.S and African nations.

That prompted the Trump administration in recent months to make concerted efforts to strengthen and deepen its relations with African nations, sending its senior diplomat and senior officials on diplomatic as well as trade visits to African nations.

Acting Secretary for African Affairs Donald Yukio Yamamoto has just returned from a bilateral consultation as well as diplomatic visits to East African countries- Eritrea, Djibouti and Ethiopia. In March, he went on a tour with the now former (ouster) Secretary of State Rex Tillerson to Chad, Djibouti, Kenya, Nigeria and Ethiopia. 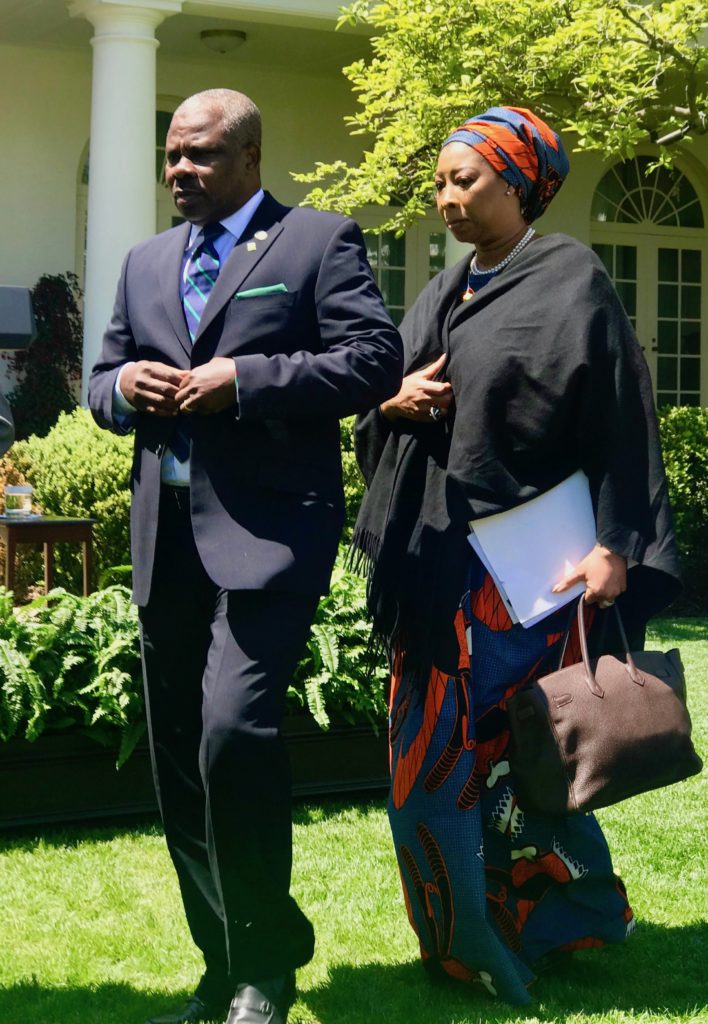 The significance of Buhari’s visit to the white House is not lost on political observers as well as businesses and investors. Many, who were once worried there might be adversed impact on trade relations with Nigeria and other African nations in the aftermaths of Trump’s comments, are now glad that the American president and his administration are making great efforts to improve relations with African nations.

Both political and business analysts see this visit as a diplomatic visit as well as good strategic medium for President Trump and his team to reassure African nations of America’s continued trade relations, humanitarian assistance, and military support to the African continent.

Analysts as well as Nigerians were pleased to hear that President Trump, when asked when will he visit Nigeria by one of the Nigerian journalists in attendance, responded  he will “like very much to visit Nigeria. It’s an amazing country and in some ways I hear from the standpoint of the beauty of the country, that there’s no country more beautiful, so I would like to.”

Whether that visit will take place is yet to be seen. However, if President Trump make a visit to Nigeria, he would be the fourth U.S president to visit the nation. The last American president to visit the country was President George W. Bush in July 2003 during a five-day, five country trip through Africa. Presidents Bill Clinton and President Jimmy Carter both visited the nation’s capital during their term in office.

Nigeria, the largest economy in Africa and the most populous nation on the continent with more than half of its population below the ages of 30, has for the most part since its independence from Britain in 1960 struggled with democracy, good governance, and widespread corruption-which in many ways have short-circuited its economic growth as well as increased wealth inequalities among its citizens.

President Buhari, who took leadership control of the country in 2015 following the nation’s first peaceful democratic general elections, has been working with his team on reversing years of damage done to the nation’s oil revenues and wealth as well as working on diversifying the economy to improve standards of living for all Nigerian citizens.

Buhari said his administration aims to diversify Nigeria’s economy by “focusing on agriculture and food security, power and infrastructure. He said they have “cut importation of rice by 90 percent, thereby saving a significant amount of money.”

“We very much welcome increased U.S. investment in Nigerian economy, especially in the non-oil sector,”Buhari underscored in his remarks. 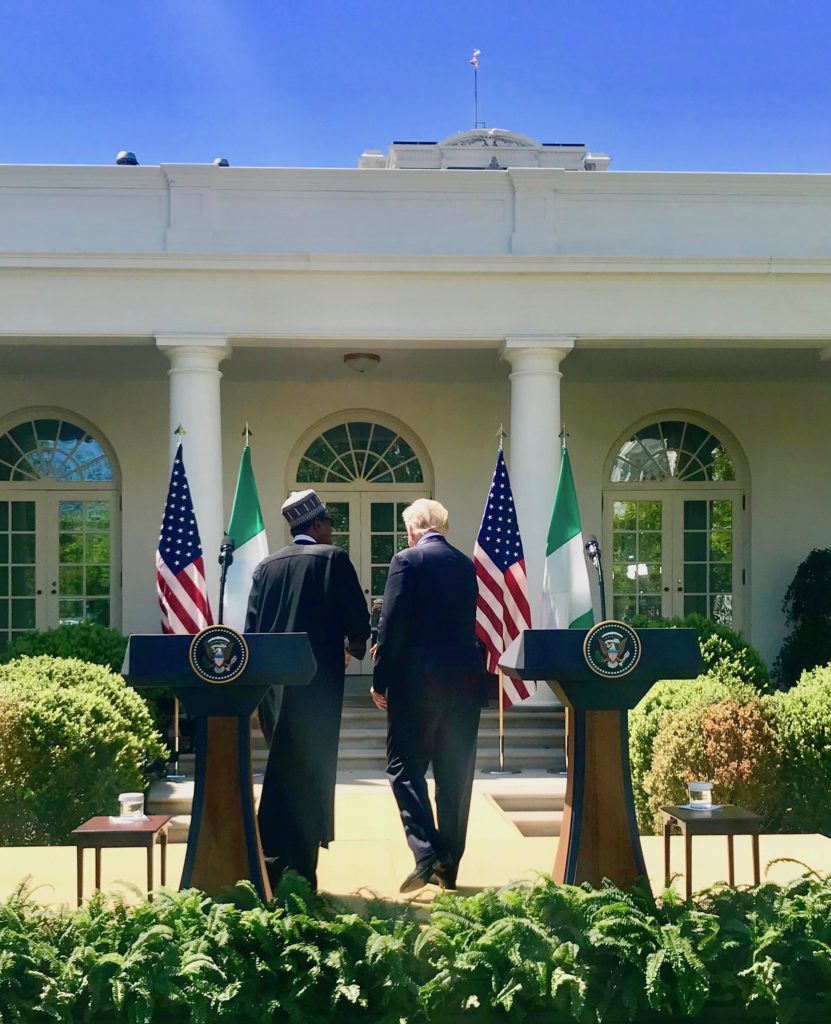 President Trump walked together with President Buhari to the Oval Office after their joint new conference. (Photo by Kemi Osukoya)

President Buhari, who came with a wish list for the American president, including asking him to grant the sales of U.S. war aircrafts to Nigeria to enable the fight against Boko Haram terrorists, also thanked President Trump and the U.S. government for their support in providing military equipments and training to Nigerian troops to combat terrorism in the Northeast region of the country.

“We recognize the strength the U.S. holds in our fight against terrorism and also appreciated very much the U.S. agreement to sell 12 war aircrafts and helicopters to Nigeria to effectively fight terrorism,” Buhari said.

The sale of the war aircrafts were agreed under the Obama administration, but were rescinded and put on hold due to a report of Nigerian military forces human rights abuses on civilians.

President Buhari said his administration “remains deeply committed to the principle of human rights, as well as promotion and protect of people freedom, even in the face of fighting terrorism,” and promised “to ensure that all documented cases of human rights abuses are investigated and those responsible for violations are held responsible.”

Buhari also thanked the U.S government for its anti-money laundering efforts, and collaboration in combating illicit funds and ensuring that the stolen funds, over $500 million that were looted by corrupt Nigerian leaders from the country’s oil revenues, and stacked away in banks around the world, were return to Nigeria.

“We thank the US government very much for the cooperation we have received in our efforts to recover stolen funds,” Mr. Buhari said.

President Buhari, who arrived in Washington D.C. on Sunday, will depart for Nigeria on Tuesday.