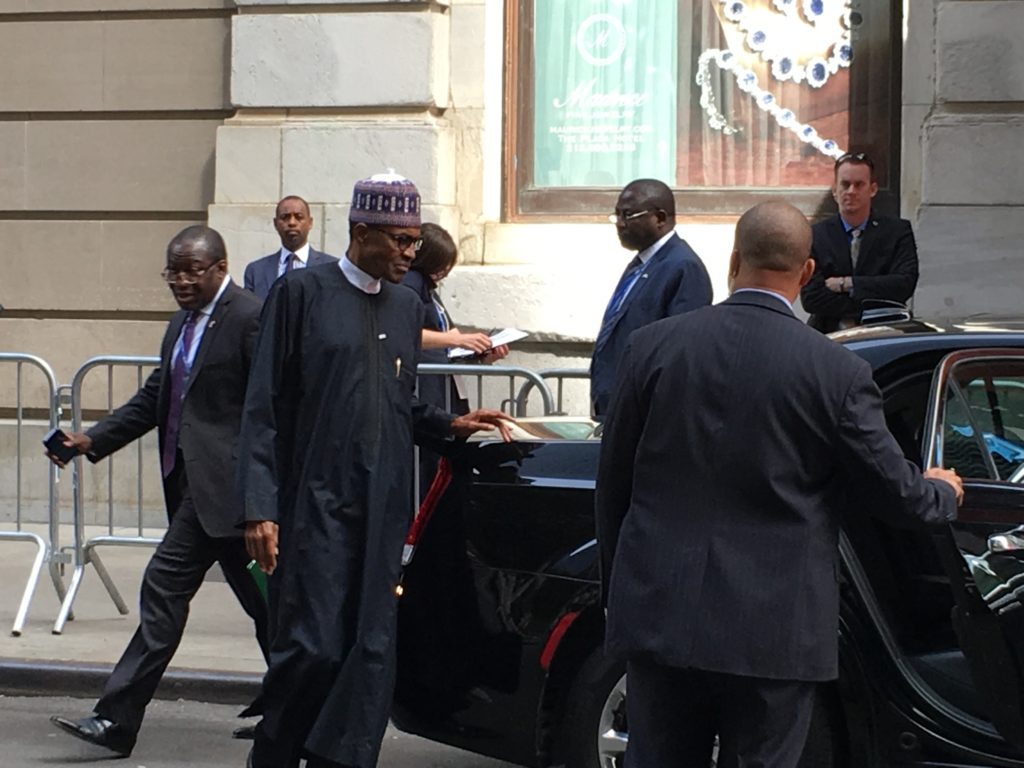 “President Trump looks forward to discussing ways to enhance our strategic partnership and advance our shared priorities. The relationship of the United States with Nigeria is deep and strong, and Nigeria’s economic growth, security, and leadership in Africa will advance our mutual prosperity,” the White House said in a statement.

The visit, the first African president to visit the Trump administration White House, is seen by experts and investors alike as one of the many positive steps taken recently by the administration to buoy and bolster relationships between the two powerful nations and other African nations, following President Trump’s alleged remarks in January in which he referred to African nations “shitholes countries.”

John Campbell, former Ambassador to Nigeria under President G.W. Bush and a Senior Fellow for Africa Policy at the Council on Foreign Relations,  said Buhari’s visit to the White House is another way for the Trump administration to improve and reassure its relations with Nigeria and other African nations, and African leaders as well as investors that the administration will continue to build upon the work that previous administrations have established on the continent.

Presidents Trump and Buhari are scheduled to discuss a variety of issues, among them strategies on combating terrorism in Nigeria and neighboring nations, promoting economic growth, good governance, peace and security in Nigeria and the region and how to continue to build on the democratic progress that the country has made under the leadership of President Buhari and a democratic leader in the region.

Campbell noted that the U.S. and Nigeria have a close relationship, and that both countries are obviously concerned about terrorism, particularly terrorism in west Africa.

“I would assumed the two presidents would talk about terrorism during President Buhari’s visit. But I also suspect they would talk about other things as well such as the economic relationship between the US and Nigeria. They will also talk about Africa as a whole and the progress for democracy and the rule of law,” said Campbell.

However, he cautioned against expecting this visit to accomplish immediate dramatic results. “We have to be very careful about talking about accomplishments. The development of a relations between two and very important states is something that takes time and consists of many small steps,” said Campbell. “It’s a mistake to look for dramatic initiatives coming out of presidential meetings.

He said Buhari’s visit should be viewed as “a case of presidential meetings to strengthening and further developing the overall relationship rather than a kind of checklists of accomplishments.”

The Trump administration, even as President Trump negatively references Africans and African nations in his remarks, has continued to build upon previously established economic, trade security and democratic relationships between the U.S. and African nations through U.S.’ programs such as the African Growth and Opportunity Act program, Millennium Challenge Corporation, Power Africa, PEPFAR, and other initiatives as well as seek new avenues for partnerships.

The AGOA, which has been the cornerstone of U.S. trade policy in Africa for almost two decades was established by President Clinton. The program has improved over the decades.  Total non-oil goods trade more than doubled from $13 billion a year to almost $30 billion a year. In 2017, total U.S. trade climbed to $38.5 billion, up from $33 billion in 2016.

Buhari’s visit to the U.S. comes at a very important time for the 75 year-old president as he rallies old and new supporters in preparing for his re-election in the upcoming 2019 Nigerian general election. He announced earlier this month that he will seek his party’s Africa Progressive Congress presidential ticket for the presidential election next February.

Buhari, a former military leader and a Northern Muslim, took office in May 2015 after defeating incumbent President Jonathan Goodluck in Nigeria’s first credible, peaceful, democratic election and transition since nearly four decades, promising to restore law and order to the nation and fight corruption in the government.

However, things have not gone smoothly as expected during his presidency. Former supporters, including former Nigerian leaders, are blaming his government for the lackluster in Nigeria’s current economy, following the 2016 oil prices plunge.

The issues of terrorism in the Northern region, the kidnapping of natives and foreign workers across the country by terrorist group Boko Haram and currency depreciation have also spooked some U.S. investors from investing in the country, even as the government works on diversifying its economy away from dependence on oil to build a more resilient and robust market.

Campbell underscored that President Buhari’s visit to the U.S. is certainly like to reassure those who are interested in investment in Nigeria. “But again, it’s important to take the long view,” he urged. “An improvement in the investment climate and improvement in the overall level of confidence doesn’t translate immediately into more investment. They usually takes some time.”

He noted that a fair assessment of the government by anyone is to recognize that “Nigeria for too long have been overly dependent on oil and natural gas and of course it’s the prices of oil and natural gas that have fallen in the past several years. The Nigerian government has a policy of seeking diversification in the economy but that again will take some time.”

In regards to how Buhari’s visit to the U.S. could impact his country’s next year election and longterm democracy, Campbell implied that whether or not Nigeria continue on its current path to a longterm democratic government will be dependent on the continuity of credible elections in the country.

“For the first time in 2015, in the country, the opposition came to power in Nigeria through credible election. The thing about credible elections, is that the more frequent they occurred the more likely future elections will also be credible and that is certainly what friends of Nigeria all hope for in 2019,” said Campbell.

*This story has been updated since it was first published on April 15,  following an exclusive interview with  CFR Senior Fellow John Campbell.