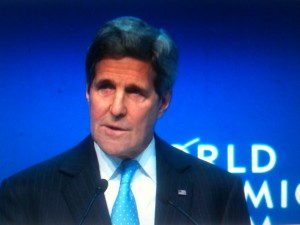 U.S. Secretary of State John Kerry arrived in Africa Sunday for a three-day visit to Kenya and Djibouti where he will meet and hold counter-terrorism and human rights talks with government officials and civil society leaders.

This trip comes two months ahead of President Obama’s visit to Kenya in July and it’s the first trip of its kind from a U.S. high level official to the country since 2012 when the International Criminal Court filed criminal charges against President Uhuru Kenyantta for his alleged role in the 2007 post-election violence that took place in the country. The charges were later dropped due to lack of evidence and corporation from the defendant.

Secretary Kerry’s visit to Kenya is meant to reinforce and deepen U.S.-Kenya relationships and to offer U.S. support in combating the Somalia-based militant group, Al-Shabaab, whose recent terrorist attack at Garish University in Nairobi, killed and injured more than 100 people, mostly students.

The attack followed a series of other attacks by the group on innocent civilians in the country, including the 2013 massacre at the Westgate Shopping mall in Nairobi, where 67 people were killed and scores other injured. In 1998, the group claimed credit for a suicide bomber who detonated a bomb in front of the U.S. Embassy in Nairobi that left 218 people dead.

As part of his two-day visit in Kenya, to honor the victims of that suicide bomb attack, Secretary Kerry Monday laid a wreath at the memorial site of the 1998 U.S. Embassy bombing.

Tomorrow, he will meet with President Kenyatta to discuss human rights issues and ways the U.S. can assist Kenyan efforts to fight the militant group. He will also meet with other government officials, civil society leaders and business leaders to talk about strengthening trade ties between the two countries.

Secretary Kerry toured the Shellack Elephant Orphanage and the National Park in the country’s capital Sunday where he met with Pat Awari, director of Pan Africa wildlife Conservation network and Dr. Cynthia Mass, director of Amboseli Trust for elephant and Dr. Philip Muruthi to discuss biodiversity.

After his visit to Kenya, Secretary will head to Djibouti in the Horn of Africa where he will round off his two-African nations visits with a visit to Camp Lemonnier, home to U.S Africa Command (USAFRICOM), the only permanent U.S. military base in Africa, to discuss how to support evacuation from war-torn Yemen.