President Paul Kagame: ‘Health is the Currency of Progress’ 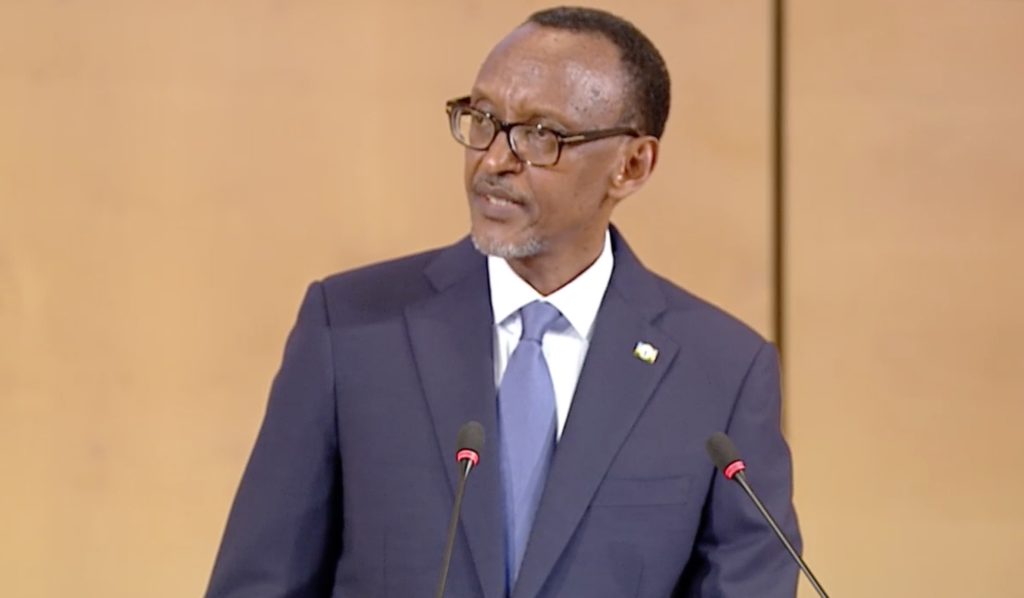 President Paul Kagame of Rwanda gives a keynote opening speech on May 21, 2018, at the 71st World Health Assembly in Geneva, Switzerland.

All around Africa, and beyond, whenever countries have put universal, community-based, primary health systems in place, the results have been good

Rwanda’s President Paul Kagame said Monday that improving health services delivery and accessibility across the African continent have to be a main focus of African nations and partners.

President Kagame, who spoke at the 71st World Health Assembly in Geneva, Switzerland, said achieving Universal Health Coverage in Africa is feasible for countries at every income level and it is the continent’s top priority.

“All around Africa, and beyond, whenever countries have put universal, community-based, primary health systems in place, the results have been good,” said President Kagame.

President Kagame, who is also the current Chairman of African Union, where a new Africa Health Strategy agenda was recently adopted by AU member states as part of the AU’s Agenda 2063, said providing UHC to citizens on the continent and the world at large “is also the right thing to do.”

He underscored the needs to invest in new innovative approaches in transforming the healthcare systems across Africa and said strong political leaderships will “certainly be necessary at every stage” as the continent embark on this journey.

Mr. Kagame lauded Ethiopia, Ghana, Kenya, Morocco, Senegal and Tunisia as great examples of countries on the continent where innovative approaches,  such as  providing health insurance subsidies, using community health workers as the frontline of primary healthcare and engaging citizens in the planning and evaluation of health provision, have made healthcare services delivery affordable and accessible to all citizens.

Building the health workforce can also radically transform women’s lives, and this will benefit all of us

President Kagame, whose country has one of the highest health insurance enrollments and recently recorded a huge reduction in maternal and child mortality due to its uses of a combination of community-based health insurance, community health workers, and external partnerships, said the key to his country’s health service transformational success was an approach that put individuals and communities at the center of health care services.

“When the means to succeed, and the responsibility for doing so, are put directly in the people’s hands, not only are lives saved, but it is also sustainable,” he said.

He added that integrating new technologies and digital applications into the health system can also made a significant difference, sometimes a life-and death — as it has done in remote areas of Rwanda, where drone aircrafts are used to quickly deliver blood and medical supplies to rural hospitals.

“It is therefore helpful to regularly remind ourselves why universal health coverage is so transformational,” he said.

Mr. Kagame noted that in order to make healthcare affordable and accessible, Africa also has to improve and invest in its health workforce. “Building the health workforce can also radically transform women’s lives, and this will benefit all of us,” he emphasized.

He cited the International Labour Organization’s report that estimates that Africa’s health economy workforce currently is missing almost 17 million workers in both health and non-health occupations. Under UHC, that shortage is projected to increase to 26 million by 2030, and half of the funding needed to achieve UHC will be used for training and employing workers in the health sector.

Mr. Kagame said rather than see the healthcare workforce shortage as a disadvantage, Africa should see this as opportunity to train and skilled its young, mostly unemployed or underemployed, population in “high-quality jobs that are not easily displaced by technology.”

He noted that greater efforts should also be given to empowering women and girls, since most of the unpaid healthcare labor, particularly providing long-term care to loved one, are done by them.

“One-quarter of the health workforce globally consists of unpaid labour by women, particularly providing long-term care. But this labour is not really free. It comes with tremendous opportunity costs as tens of millions of women forego employment,” he underscored.

He said having an improved healthcare system and providing universal coverage, will have greater impact on women and girls and is “critical to making gender equality a reality.”

Rwanda is one of the few countries in the world that has worked on closing its gender gap inequality. Half of its parliament currently are represented by women, a mindful step the country took and implemented in reuniting Rwandans following the 1994 genocide, -where thousands of people, many of them women and girls, were raped and then killed due to ethnic conflicts in the country.