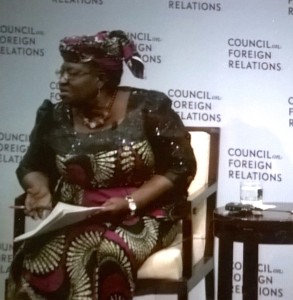 It’s no secret that corruption is ubiquitous in Nigeria. In fact, it’s one of issues and challenges to trade that investors and businesses often complain about when they talk about doing business in the country. And that’s the most important reason why the incoming administration must help the country rid itself of that image, said current Nigerian Finance Minister Ngozi Okonjo-Iweala.

“To address the issue of corruption, and transparency- those issues that have become so prominent that sometimes you mention the name Nigeria, the next thing is people say “corruption.” said Minister Okonjo-Iweala, speaking Wednesday in Washington, D.C. at Council on Foreign Relations. “The country must get away from this image. Must.”

She added that the way to go about doing that is to observe two things: First, impunity must be dealt with. Second, have in place institution mechanisms that will help fight against corruption.

“All those who perpetrate acts, they should be found, punished, whatever needs to be done, done,” said Minister Okonjo-Iweala. “But the second part that is not so sexy, and which people don’t talk about—excuse my French—is that you cannot fight corruption if you don’t have the institutions, processes, and systems in place.”

Minister Okonjo-Iweala, who has managed Nigeria’s finance for the last two administrations -President Goodluck Jonathan and President Olusegun Obasanjo- said now that the much anticipated presidential election is over and people have rightfully voiced their opinions through a democratic process about widespread issues affecting the country in electing a new president, the next thing that the new federal government should tackle, other than the obvious security issues surrounding Boko Haram terrorist activities in the Northern part of the country -is to put in place institutional mechanisms that will help fight corruptions and enhance transparency in the government and restructure programs and processes that are not working so the country’s economy agenda can move beyond oil to strengthen the economy.

Such mechanisms, said Minister Okonjo-Iweala, will include building upon the diversification agenda that was already put in place by the outgoing administration, and rebuilding the country’s economic buffer- which will need both economic and political consensus, which the current administration wasn’t able to achieve. And top of her list was the need to diversify the country’s sources of revenues, and refocus it on deriving more from the non-oil sectors instead of the current situation where 70 percent of its revenues come from oil and 30 percent from non-oil.

“We need to diversify the sources of revenues and look toward a 30-70. Right now, it’s 70 percent oil revenues, and 30 percent in non-oil,” she said. “We want to reverse that and be much more like Mexico in a decade from now, where we are looking at 30 percent from oil and 70 percent from non-oil.”

President-elect Muhammadu Buhari hasn’t laid out his full agenda for the country, however he seems intent on closing corruption loopholes and eliminating terrorism insurgency in the country. His somewhat impressive track record of fighting corruption during his short military reign over the country in the late 1980s, was enough to give people hope that he will deliver on his campaign promises.

Minister Okonjo-Iweala acknowledged that going forward, to deliver on the political and economic promises made during the campaign, the new government will encounter hurdles and need to build up strong political will when it comes to managing Nigeria’s oil reserve resources, and the many unsolicited requests from greedy government officials who want personal shares of the country’s economy wealth, something she said she became too familiar with that she stopped going to economic council meetings.

“Going forward, it’s important for the new government to build up political will, that if oil prices even climb slightly higher, the country has to save,” she said. “We need to learn that lesson, that we cannot do things the way we used to do them and some consensus has to emerge.”

She added that the new administration should consider using the country’s Sovereign Wealth Fund to replace the country’s Excess Crude Account so that all the savings would be merged.

She also acknowledged that while much progress was made under the two administrations she has served, they couldn’t address some of the nation’s paradoxical issues such as being the richest country in Africa (GDP wise) but having a high poverty and youth unemployment rate that equals that of a non-mineral rich country, high socioeconomic inequality and the fact that Nigeria’s power section is at a dismal point.

She said those issues are results combination of state and local governments ineptness at setting the right local and state agenda and managing their budgets properly to meet the needs of their people, and the lack of federal government to hold them accountable for their actions.

She said moving forward, the new administration should consider holding local and state governments accountable for how they spend their federal government funds.

“The fundamental thing is that we must find ways and means to either incentivize states or hold them accountable, because they get 48 percent of the resources,” she said. “Under the [outgoing] administration, there were strong plans for an initiative in the northeast, which is the region with poor indicators, so a combination of holding states accountable for delivering the services they should, couple with federal government action, you know to support this- not to usurp their role- I think that would help to answer the question. But we must target those areas.”

On diplomacy issues between the U.S and Nigeria, Minister Okonjo-Iweala said she’s hopeful that the current strains felt in the U.S.-Nigeria relationship will soon be eliminated as communication improves between the two countries.

“I would hope that for the future- that I know this will be the case, that Nigeria-U.S. relations will be on a smooth path,” she said. “Actually, if you speak to people from the State Department, they will tell you that they don’t really see- i mean, their reaction is that things are OK. But I do think that we need to open better communications and rebuild.”