by Editor
in Inside Africa, News 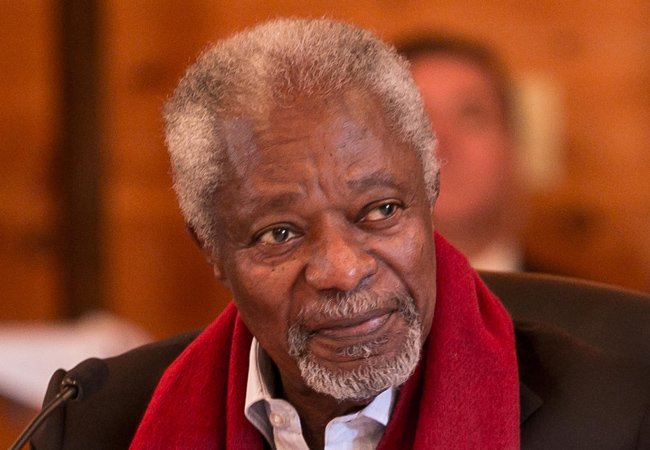 The former Secretary General of the United Nations Kofi Annan died Saturday morning following an illness. He was 80 years old.

The former statesman was surrounded by his family during his last days, his foundation, The Kofi Annan Foundation said in a statement.

Mr. Annan served as the UN Secretary-General from 1997 to 2006, during which  he played a major role in galvanizing a global effort to fight  HIV/AIDS and malaria, and advocated for the protection of human rights. He helped develop the UN Millennium Development Goals, a strategy to help address and eliminate global poverty by 2015.

He joined the UN in 1962 through the World Health Organization in Geneva as an administrative and budget officer and rose up through the ranks the UN to become the first secretary-general to be appointed from within the organization ranks.

He was instrumental in helping to negotiate a peace deal that ended the violence that erupted following the 2007 elections in Kenya. He led the 2008 Serena Peace talks between the political parties.

The news of Mr. Annan’s death came as a shock to many people, some were people he worked with at various points during his lifetime, and others are people who have been positively impacted through his humanitarian work.

“The world will feel your absence because your presence was felt through diligence in your work to promote peace and stability in your country and the world as a whole,” one twitter writer wrote.

This sentiments was also shared by world leaders, many who woke up to the sad news.

Current UN Secretary-General Antonio Guterres said  “Kofi Annan was a building force for good. I joined in  mourning his loss. In this turbulent and trying times, his legacy as a global champion for peace will remain a true inspiration for us all.”

UN Deputy  Secretary-General Amina J. Mohammed, a fellow African and a friend of Mr. Annan said he was a global icon “who lived a life deeply committed to serving humanity. He did it with dignity and gave hope to the voiceless.” Ms. Mohammed is the first African woman to serve in the most highest leadership position at the UN,

Carles Puigdemont, President of Catalunya, also expressed his condolences to the family.  He described Mr. Annan’s death as “a great loss for peace and freedom in the world. In Catalonia we will always remember his call for dialogue and negotiation with Spain through The Elders,” he wrote.

Theresa May, Prime Minister of United Kingdom wrote that Mr. Annan was a  “great leader and reformer of the UN,”  who made a “huge contribution to making the world he has left a better place than the one he was born into.”

U.S. Secretary of State Mike Pompeo also joined the international community in remembering Mr. Annan’s remarkable service to the world and offered his condolences to the Annan family and to the people of Ghana. “Mr. Annan spent his life advocating for peace and human dignity during his long career at the United Nations.  Even after leaving his post as Secretary-General he embodied the mission of the United Nations, by sowing the seeds of peace,” he said in a statement.

Deputy Chair of The Elders, Gro Harlem Brundtland, speaking on behalf of the The Elders said in a statement that “the world has lost an inspiring figure whose achievements will never be forgotten, and whose commitment to peace and justice will endure to inspire future generations.” He said the members of the organization are “devastated at the loss of our dear friend and fellow Elder. Kofi was a strong and inspiring presence to us all, and The Elders would not be where it is today without his leadership. Throughout his life, Kofi worked unceasingly to improve the lives of millions of people around the world. While we mourn his passing today, we resolve as Elders to continue to uphold his values and legacy into the future.

Archbishop Emeritus Desmond Tutu said Mr. Annan’s passing was an unexpected and devastating loss to everywork who worked with him and the international community. “We give great thanks to God for Kofi Annan, an outstanding human being who represented [Africa] and the world with enormous graciousness, integrity and distinction. [Our]our warmest love and deepest, deepest condolences to Nane and the Annan family.”

President of the African Development Bank, Akinwumi Adesina, who was a former mentee of Mr. Annan said he was saddened when he learned about the death of  his former mentor.  “He was a great personal mentor and father to me. His simplicity, decency, uncommon humility, selflessness and compassion made him a gem for humanity,” said Mr. Adesina.

Former U.S. President Barack Obama eulogized Mr. Annan as “a diplomat and humanitarian who embodied the mission of the UN like few others. His integrity, persistence, optimism and sense of our common humanity always informed his outreach to the community of nations. Long after he had broken barriers, Kofi never stopped his pursuit of a better world and made time to motivate and inspire the next generation of leaders. Michelle and I offer our condolences to his family and many loved ones.”

Richard Branson ,who served with Mr. Annan on the advisory board of The Elders, said he was an extraordinary individual who committed his life to guiding the world to a better place. “Kofi was a wonderful listener. He rarely spoke unless he had something important to say and then everyone in the room would strain to hear his thoughtful words. Always soft-spoken, yet determined and principled, he became the world’s top diplomat, a champion of humanity who restored the UN’s moral authority at a critical time in its history,” said Mr. Branson.

Musician Peter Gabriel, who also worked with Mr. Annan on the board of The Elders said his death is a great loss to the global community. “We have lost not just a great and inspiring leader but a good friend and one of the great peacemakers of our time, He believed in the power of quiet diplomacy and in the essential right of all to peace –  and that all disputes in the end have to be settled around a table, so the sooner the serious talk begins, the sooner you can put an end to the suffering.”

He added that Mr. Annan adopted many causes, but always championed human rights, including access to healthcare, education and opportunity. “He was one of the first leaders to realize that the trickle of refugees and migrants would turn into a  flood of desperate people, with thousands of completely avoidable deaths, prison-like refugee camps, along with unwanted immigration that would fan the flames of populist racist politics,” Mr. Gabriel said.

The flags outside the UN Headquarters in New York city and its offices around the world will be lowered to half-mast for the next three days in honor of the former Secretary-General.

Mr. Annan was born in 1938 in Kumasi, Ghana. He began his studies in Ghana before moving overseas to further his educations. He was fluent in several African languages as well as English and French.  He earned a Master of Science degree at the Massachusetts Institute of Technology’s Sloan School of Management.

He is survived by his wife, Nane and their three children Ama, Kojo and Nina .