“The support for Africa on the Hill is both Democrats and Republicans. You go on either side of the aisle, we get tremendous support and I think any new administration coming in will see the opportunities,” says Assistant Secretary for African Affairs Linda Thomas-Greenfield.

As a part of the United States’ African policy, President Barack Obama on Thursday signed an executive order establishing a Power Africa Working Group, which will help advance U.S.’s objectives of increasing access to affordable electricity in Sub-Saharan Africa through the Power Africa initiative.

The working group, which will serve as a liaison both for the US government’s various agencies involved in promoting and implementing the Power Africa initiative as well as for non-US governments and partners, including private sector actors, will consist of representatives from the US executive powers and agencies, including the Departments of State, the Treasury, Agriculture, Commerce, Energy, Export-Import Bank of the United States, United States Agency for International Development, Overseas Private Investment Corporation, United States Trade and Development Agency, Millennium Challenge Corporation and the United States Army Corps of Engineers.

The multi-agency coordinating and advisory body will help the US government identify, evaluate, prioritize, as well as provide policy reforms in support of energy projects in order to advance delivery of affordable energy across Sub-Saharan Africa.

Across the African continent, lack-of or limited access to reliable and affordable energy are major impediments to economic growth and development.

The Obama administration’s objective is to partner and work with African governments, multilateral partners to tap into the continent’s enormous natural energy resources, including its extensive clean geothermal, hydro, wind and solar energy resources, as well as the vast oil and gas reserves, to bring access to affordable electricity for 60 million new households and businesses in both urban and rural areas of Africa.

The president’s latest action is part of a series of actions taken by the Obama administration over the past three years, including the Power Africa Roadmap-which was launched at the beginning of this year in coordination with Power Africa partners, to ensure that the US meets its commitment to support and help develop affordable electricity in Africa by 2030.

The Power Africa initiative, which was launched by President Obama in Tanzania during his trip to Africa in 2013, has become a linchpin for other US-Africa’s trade projects and programs as well as US foreign policy agenda by establishing a platform for private and public sectors on both sides of the aisle to develop and expand trade reach.

The scheme, conceived to help sub Saharan African countries leapfrog to renewable energy by improving access to affordable electricity and energy through on-grid, mini-grid and off-grid solutions, has generated almost $100 billion investments from the public and private sectors since its inception, a huge increase from its initial $7 billion pledged from the US government in 2013.

The scheme has also significantly helped shift US-Africa agenda from a monetary assistance or grant-led agenda to a new trade partnership agenda, the latter enjoying much more favorable supports from both governments, including a bipartisan support from the US Congress, which many in the public and private sectors expect will continue after the Obama administration ends early next year.

“The other part of our Africa policy – we have a huge Africa diaspora. No – sometimes people compare us to other countries in the world. You don’t hear about an Africa diaspora in China. We have people from every country on the continent of Africa who are Americans – they’re hyphenated Americans – and they will continue to advocate for policies that will enrich the relationship that we have with the continent of Africa.”

“The support for Africa on the Hill is both Democrats and Republicans.  You go on either side of the aisle, we get tremendous support and I think any new administration coming in will see the opportunities,” Assistant Secretary for African Affairs Linda Thomas-Greenfield told African reporters during a press briefing at the Foreign Press Center in New York in September. 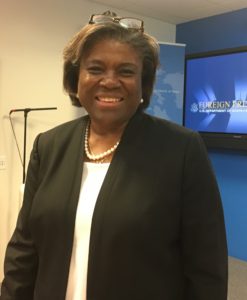 The US-Africa relations as burgeoning trading- partners is a shift from the previous monetary assistance-led relationship as indicated by the amount of investments that investors and businesses on both sides have poured in to creating and distributing electricity across Africa.

Further cementing this trade relationship milestone, at the second U.S.- Africa Business Forum held this year in New York, the U.S. government and its Power Africa partners announced several new energy projects and transactions totaling more than $1 billion worth of debt and finance– which will advance deals that aim to provide access to electricity across sub-Saharan Africa.

Assistant Secretary Thomas-Greenfield said these examples laid the basis for continuous partnership on programs and issues which will benefit both sides- the US and African countries.

She noted that Africa is the last frontier with opportunities for investments and affirmed that the private sector will lead the U.S. investment engagement on the continent of Africa and “they will engage with policymakers to ensure that our policies support that. So I don’t see that there will be any significant diminishment of our commitment to continue to work on the continent of Africa. There will be differences in style.  There will be differences in focus and priorities and there will be new initiatives, but I daresay that when we look at the initiatives that are important to Africa, they cross party lines.”

In addition to these commitment, Thomas-Greenfield confidently assert that the connection with the African diaspora in the US “the other part of our Africa policy – we have a huge Africa diaspora.  No – sometimes people compare us to other countries in the world.  You don’t hear about an Africa diaspora in China.  We have people from every country on the continent of Africa who are Americans – they’re hyphenated Americans – and they will continue to advocate for policies that will enrich the relationship that we have with the continent of Africa.”

The establishment of the Power Africa Working Group, Coordinator for Power Africa, and the Electrify Africa Act of 2015– which went into effect in February of this year, furthers solidify the Power Africa agenda to work beyond the current administration.

The new Working Group will be co-chaired by the Coordinator for Power Africa within USAID and a member of the National Security Council staff, chosen by Assistant to the President for National Security Affairs.