by Editor
in Women & Girls 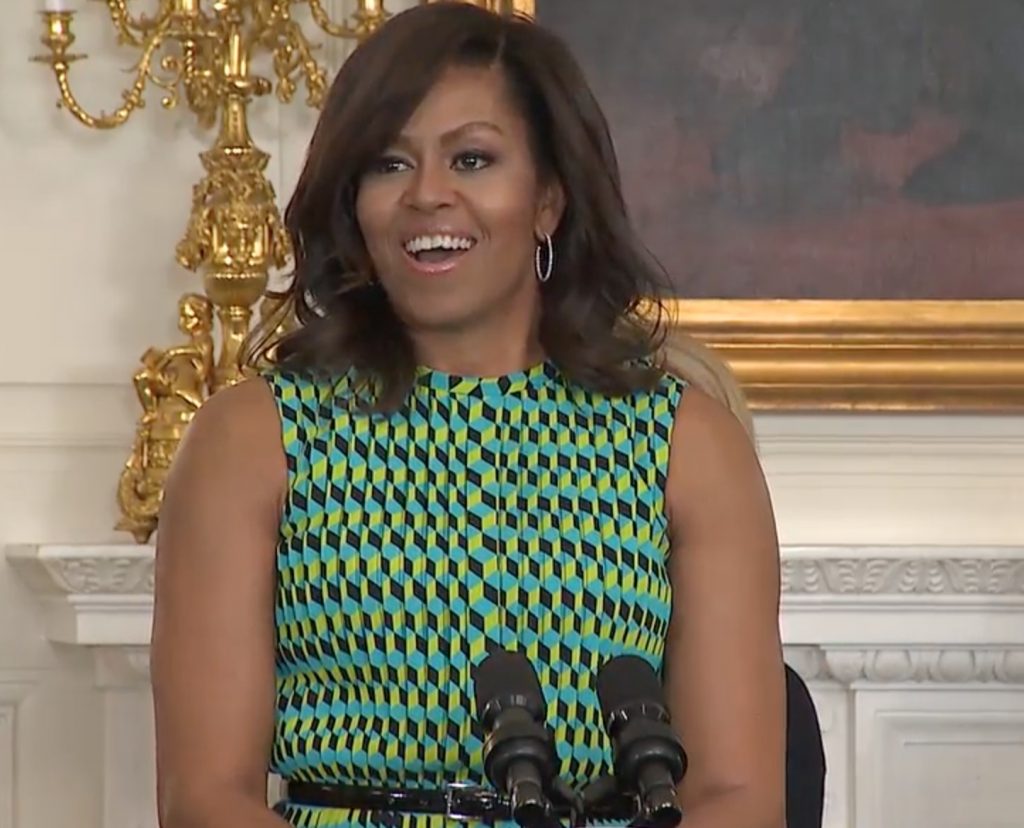 U.S. First Lady Michelle Obama giving a speech during an event at the White House.

The First Lady of United States Michelle Obama arrived today in Liberia for a two-country visit in Africa that includes Morocco, to highlight one of her initiatives, Let Girls Learn, which promotes adolescent girls’ access to quality education.

Mrs. Obama and President Obama launched the initiative a little over a year ago as a global call to action to ensure that barriers which often prevent girls in developing countries from attending school or completing their secondary education are removed, so adolescent girls worldwide can receive access to a quality education, regardless of their family background.

The Let Girls Learn initiative serves as an auspice to other U.S. agencies-led international programs and projects run by the State Department, the U.S. Agency for international Development, the Peace Corps, and the Millennium Challenge Corporation, which help in capacity building, and empowering of people as well as in assisting governments in their transition to democracy and rebuilding of conflict zones.

Since the initiative was launched in March 2015, over $3 billion have been pledged by both public and private sectors, including CARE, Inc, Johnson & Johnson, Lyft, Jet Blue, Proctor & Gamble, Starwood Hotels, Oracle, PayPal, The Hershey Company, International Rescue Committee and jewelry maker Alex and Ani, to support education programs that will benefit adolescents girls worldwide. A $2.5 billion investment by the World Bank Group, over a five year period, will go towards education projects that directly benefit adolescent girls worldwide. At the U.N. General Assembly last year, nearly 200 countries promised to make adolescent girls’ education a top priority.

For obvious reasons, Africa is closest to the President’s and First Lady’s hearts because of the President’s ties to the continent- President Obama’s father was from Kenya.  The U.S. has also enjoyed overwhelming popularity among the African people and African governments.

Through the Let Girls Learn, the U.S. is funding over 50 programs and projects that support girls’ education and address poverty, HIV, sanitation and other issues that keep girls out of school in African countries, including in Democratic Republic of Congo, Egypt, Ethiopia, Ghana, Kenya, Liberia, Malawi, Morocco, Nigeria, Rwanda, Senegal,Tanzania and Uganda.

Last year, the U.S. government partnered with the United Kingdom’s Department for International Development to advance girls’ education in DRC with a $180 million commitment over a five year period that will ensure young women’s access to accelerated and alternative education programs.

In Nigeria, the U.S. is providing humanitarian assistance and education for girls and boys affected by violence and unrest caused by Boko Haram/Islamic State West Africa Province in northern Nigeria.

The U.S. also continue to support the Nigerian-led government efforts across a range of shared interests and priorities, including governance, development and security to ensure the safe return to their families of the Chibok school girls and women that were abducted by the  terrorist group.

According to a World Bank study, more than 62 million girls worldwide are not attending schools, half of whom are adolescents, mostly in Africa and South Asia.

Mrs. Obama was one of the prominent people that spoke out against the terrorist act following the 2014 abduction of the Chibok school girls from their dormitory and she continue to be a proponent for the safe return of the girls to their families, using her social media and first lady platform to campaign.

When asked why Nigeria is not included on the list during this trip, White House spokesman, Peter Boogaard, said “there are many factors that determine the First Lady’s travel, including scheduling and time constraints, but the choice of countries does not indicate a lack of commitment to or support for our other regional partners in Africa.”

Mr. Boogaard underscored the U.S.’s strong commitment to Nigeria, noting that the U.S. “continues to expand its strong partnership with the government of Nigeria across the entire range of our shared governance, development, and security priorities. This includes our assistance in northern Nigeria to help provide education to girls effected by the unrest there. We continue to provide intelligence, training, and advisors to support Nigerian-led efforts to bring about the safe return of all those kidnapped by Boko Haram/Islamic State West Africa Province, including the Chibok school girls. We also support those affected by Boko Haram’s violence through ongoing humanitarian aid including food assistance and victim support services.”

Mrs. Obama, who is traveling on this visit to Africa and Europe with her two daughters, Sasha and Malia and her mother, Mrs. Robinson, will meet with President Ellen Johnson-Sirleaf during her visit to Liberia.

President Sirleaf, who is the first elected female Africa president, is also a Nobel Prize winner and a fellow alumni of Harvard University, has been one of the female avid advocates on the continent for gender equality and women’s economic and political empowerments.

Liberia has dealt with significant challenges in recent years with the 12 year-civil war and the Ebola crisis that have put a dent on its economy and development. It has one of the highest school drop-out and illiteracy rates in Africa, with nearly two-thirds of school-age children, particularly  adolescent girls, not attending school, which has also risen since the Ebola crisis.

According to the national statistic, the gender disparities for adolescent girls become more obvious with secondary education, with only 33 percent of girls enrolled in secondary education as young girls are subjected to domestic violence, rape and as they become pregnant, unable to finish their education.

During her trip in Liberia, the First Lady will participate in a special event at a Peace Corps camp in Kakata, Liberia, where she will meet with Peace Corps volunteers, girls and young women from Liberia who are participating in a Peace Corps-led leadership program called Girls Leading Our Worlds (GLOW), followed by a visit to Unification Town, a town in Liberia, where she will participate in discussion on how to address the difficult challenges that adolescent girls face in the country in obtaining an education.

The First Lady will be joined by actress Freida Pinto, who has been an advocate for girls’ education, for a moderated conversation.  The conversation will shed spotlight on the education barriers girls face as Liberia moves beyond the Ebola epidemic, and the U.S. government’s efforts to continue to address those barriers to provide adolescent girls with equitable access to safe and quality education.

Mrs. Obama will then travel to Marrakech, Morocco. Also accompanying the first lady on her trip to Africa and Europe is the media group HelloGiggles and CNN.

Mrs. Obama’s visit to Liberia builds on US-Liberia deep historical ties as well as to show support for the country’s continuous efforts in rebuilding its democracy and economy in the aftermath of civil war and the recently ended Ebola epidemic.

In Liberia, through the Peace Corps Let Girls Learn program, Peace Corps volunteers will be trained in gender-equality issues within communities to identify the barriers that prevent girls in their community from completing their education. They will then design and fund a community-led project that will help support each community in ensuring that girls finish their secondary education.

“Liberia is one of our anchor partners in West Africa and we believe that the success of Liberia’s democracy and its people is critical to the future of the broader region,” said Benjamin J. Rhodes,  Deputy National Security Advisor. “And the opportunity to have the First Lady go and speak to the importance that we place not just on foreign policy issues but on human development will be critical.”

The U.S. government has already supported two education-related programs through its USAID’s programs- Liberian Teacher Training Program, a five-year project designed to utilize an integrated set of policy, support, and capacity building activities to address the critical shortages of qualified teachers and institutional capacity to produce new teachers and Excellence in Higher Education for Liberian Development project – a crafted and detailed blueprint to equip top-performing young Liberian women and men for professional careers as leaders, managers, extension agents, researchers, and small business owners in the two most critical current development sectors in the country—agriculture and engineering.

Mrs. Obama’s visit to Morocco will underscore the value of empowering women and girls as well as highlight U.S’ commitments to the government to help adolescent girls in the country go to school and stay in school.

Morocco has been a strategic partner of the U.S. in North Africa in counterterrorism and diplomatic efforts in the region and Middle East. It has enjoyed a relatively stable and successful government in a very difficult region.

“It’s very relevant to our broader objectives in supporting Morocco and the North Africa region that the United States is demonstrating that just as we focus on areas of security cooperation, we’re also focused on the empowerment of young people. And we of course want to see their ongoing efforts to improve the livelihoods of their people and to pursue reforms — is successful.  And the First Lady’s trip will certainly advance that relationship,” said Mr. Rhodes.

Mrs. Obama will be joined in Marrakech by actress Meryl Streep, who has also been an advocate for girls’ education, and Freida Pinto.  And they will participate in a conversation with adolescent girls, moderated by CNN’s Isha Sesay.

The First Lady will also attend an Iftar hosted by Her Royal Highness Lalla Salma.

From the early stage of the administration in 2009, Mrs. Obama has been a strong advocate for ensuring young people’s access to quality education, especially young women, both at home and abroad, employing the support of the private sector to help fund programs that will provide funds and ensure barriers that prevent girls from attending school are removed.

“Every single one of us has a role to play on [the issue of educating our young people].  And [we] can start today by going to LetGirlsLearn.gov and find out how to get involved right now.  No contribution is too small, as you can see, because in the end, that’s how we’re going to solve this problem –- one girl, one school, one village at a time,” Mrs. Obama told an audience during an event in March marking International Women’s day and the one year anniversary of the Let Girls Learn. “Even young kids get it… We’re in this together.  Because these girls are our girls.  They are us.  They each have the spark of something extraordinary inside of them just like our daughters –- and our sons -– and their fate is very much our responsibility.”

The impact of Let Girls Learn program has increased worldwide, with  programs in 36 countries, including in Japan, Cambodia, South Korea. Students across the U.S. are learning about girls in developing countries and are embracing their issues as their own. For example, students at a middle school in California raised $1,500 for Let Girls Learn by selling popsicles and hot chocolate.  At a school in Wisconsin, students raised $594 from their friends and families to donate.  As part of their campaign, they created signs to raise awareness.

“This is a unique trip in the sense that the First Lady is going to three different regions that are important to the United States — Sub-Saharan Africa, North Africa and then Europe.  But each of these countries in their own way has been a very important partner for the United States on a host of issues for many years.  And so this trip will allow the First Lady to reach directly to publics of three important U.S. partners and talk about an issue that is important to all of us:  The education of girls, and the empowerment of women and girls more broadly,” said Mr. Rhodes.

A documentary film of the First Lady ‘s trip to Liberia, Morocco and Spain is being produced by CNN and will be broadcast in late summer, the White House said during a press conference. The film is being funded by CNN.